What Is Ion Propulsion?

An ion propulsion is a form of electric propulsion used for spacecraft propulsion. It creates thrust by accelerating ions using electricity. Here, the propellant is ionized, and then enters a region of strong electric field, where the positive ions are accelerated. Passing through a grid, they leave the engine as a high-velocity exhaust stream. The electrons do not leave, and so the exhaust is positively charged. Ultimately, this would result in a retarding field developing between the spacecraft and the exhaust, and so an electron current is therefore discharged into the exhaust to neutralize the spacecraft. The electrons carry little momentum, and so this does not affect the thrust.

The below schematic diagram shows the thruster is divided into two chambers. The propellant enters the ionization chamber in the form of neutral gas molecules. There is a radial electric field across the chamber, and electrons are released from the cathode (which can be a thermionic emitter). The electrons are accelerated by the radial field, and reach energies of several tons of electron volts, which is enough to ionize the neutral propellant atoms by collision.

To extend the path length of the electrons and ensure that they encounter as many neutral atoms as possible, an axial magnetic field is provided, which makes them move in a spiral path. The ionization therefore becomes efficient; that is, the number of ions produced, as a function of the electron current, is maximized.

In theory, all the electrical energy in an electrothermal thruster enters the exhaust stream, but in an electromagnetic thruster each ion in the exhaust has to be created with an energy of about 20−30eV per ion. This energy does not go into propulsion, and is lost. Thus, it is important to maximize the ionization efficiency.

The ionized propellant atoms drift under a small negative field through the first grid into the accelerating chamber. The grids have a high potential across them, and are separated by 1−2 mm. The ions gain energy in the strong electric field and, passing through the outer grid, form the ion beam. There is no need for a nozzle to generate the thrust, because the motion of the ion beam is ordered and not chaotic. 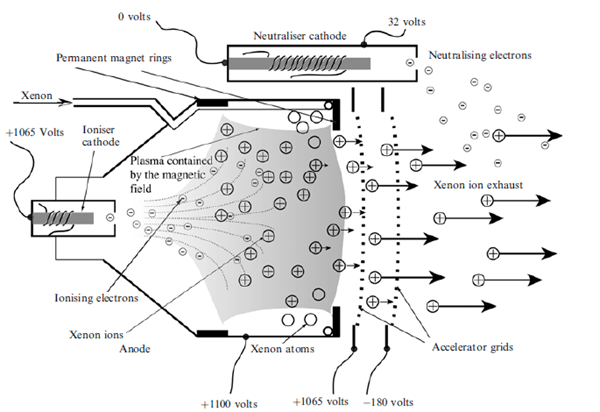 Construction Of An Ion Propulsion System:

The power processing unit converts the electrical power generated by the power source into the power required for each component of the ion thruster. It generates the voltages required by the ion optics and discharge chamber and the high currents required for the hollow cathodes. The propellant management system controls the propellant flow from the propellant tank to the thruster and hollow cathodes. It has been developed to the point that it no longer requires moving parts. The control computer controls and monitors system performance. The ion thruster then processes the propellant and power to propel the spacecraft.

The ion thruster is simple in concept, as described above. The theory of operation is also relatively simple, and because it is so different from that of a thermal rocket it is useful to include a brief description here, so that the strengths and limitations can be appreciated.

As in all reaction propulsion systems, the thrust depends ultimately on the transfer of momentum from an exhaust stream to the vehicle. The exhaust velocity is straight forwardly given by the potential difference between the grids. Ions dropping through this potential difference each gain a fixed amount of energy, and this converts directly into a velocity.

The other parameter in the thrust is the mass flow rate. For an ion thruster, this is directly related to the current flowing between the grids, and the ion current itself becomes the exhaust stream. To increase the thrust of a given ion thruster, the current has to be increased; but it cannot be increased indefinitely, as there is a natural limit. It is this limit which we can examine theoretically. 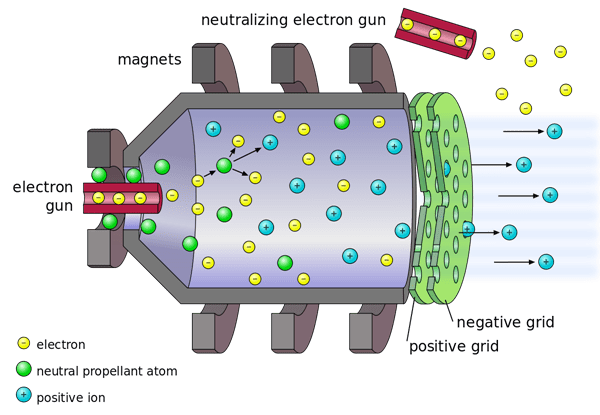