What Is Ramjet Engine?

A ramjet, sometimes referred to as a flying stovepipe or an athodyd (aero thermodynamic duct), is a form of airbreathing jet engine that uses the engine’s forward motion to compress incoming air without an axial compressor or a centrifugal compressor. Because ramjets cannot produce thrust at zero airspeed, they cannot move an aircraft from a standstill. A ramjet-powered vehicle, therefore, requires an assisted take-off like a rocket assist to accelerate it to a speed where it begins to produce thrust.

Ramjets work most efficiently at supersonic speeds around Mach 3 (2,300 mph; 3,700 km/h). This type of engine can operate up to speeds of Mach 6 (4,600 mph; 7,400 km/h). Ramjets can be particularly useful in applications requiring a small and simple mechanism for high-speed use, such as missiles. As speed increases, the efficiency of a ramjet starts to drop as the air temperature in the inlet increases due to compression. As the inlet temperature gets closer to the exhaust temperature, less energy can be extracted in the form of thrust.

To produce a usable amount of thrust at yet higher speeds, the ramjet must be modified so that the incoming air is not compressed (and therefore heated) nearly as much. This means that the air flowing through the combustion chamber is still moving very fast (relative to the engine), in fact it will be supersonic—hence the name supersonic-combustion ramjet, or scramjet. 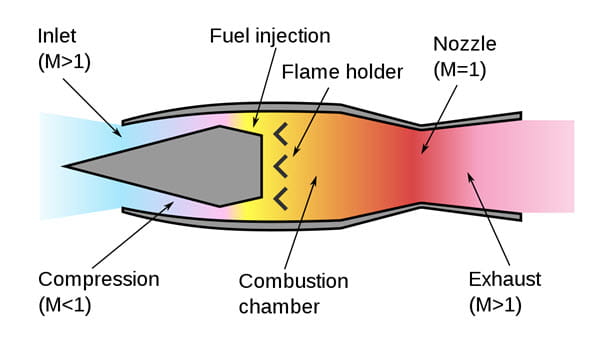 A discussion of a ramjet engine can be simplified by assuming that the ramjet is stationary, and that air approaches the engine at a velocity equal to the vehicle speed. As air enters the inlet, adiabatic compression causes an increase in temperature and a decrease in velocity. The air is further heated by combustion of the fuel which also increases the mass flow, typically between 5 and 10%. The high-temperature compressed gases are then expanded in the nozzle and accelerated to high velocity.

The thrust developed by the engine is the net rate of change of momentum of the gases passing through the engine and is equal to the mass flow rate of the air plus burned fuel times the jet velocity minus the flow rate of air times the air velocity. The effective net thrust on the vehicle will be somewhat less than the engine thrust because of skin friction drag on the air flowing around the ramjet vehicle. There are three distinct conditions under which a ramjet engine diffuser can operate, depending on the heat released in the combustor.

When the heat released in the combustor is just enough that the back pressure at the exit section of the subsonic diffuser causes the normal shock to be positioned at the inlet throats, the operation is said to be critical; this is the design condition. 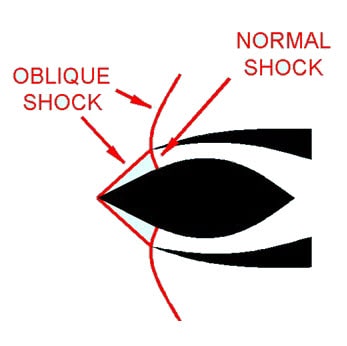 If the heat release in the combustor is increased, the static pressure at the exit of the subsonic diffuser is greater than can be achieved under the design condition. The normal shock wave moves upstream, is expelled from the diffuser, and continues to move toward the vertex of the supersonic diffuser. Behind the normal shock wave, the flow is subsonic. Since the shock wave is detached from the inlet, the incoming air spills over the cowl of the diffuser increasing vehicle drag and possibly leading to instability. 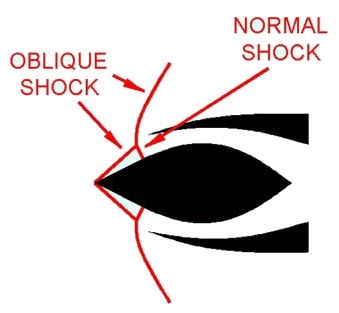 When the heat released in the combustor is decreased, the back pressure at the outlet section of the diffusion system becomes too small to maintain the normal shock at the inlet. The excess pressure associated with the internal flow must therefore be dissipated inside the diffusion system by a strong shock wave forming in the diverging portion of the diffuser. In other words, the normal shock moves into the inlet. 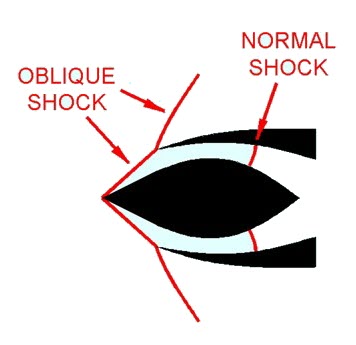 Explanation With Respect To Pressure Recovery And Mass Flow Rate Of Air: