What Are Liquid Propellant Rockets?

In some applications an engine may also include a thrust vector control system, various instrumentation and residual propellant (trapped in pipes, valves, or wetting  tank walls). It does not include hardware for non-propulsive purposes, such as aerodynamic surfaces, guidance, or navigation equipment, or the useful payload, such as a scientific space exploration package or a missile warhead. 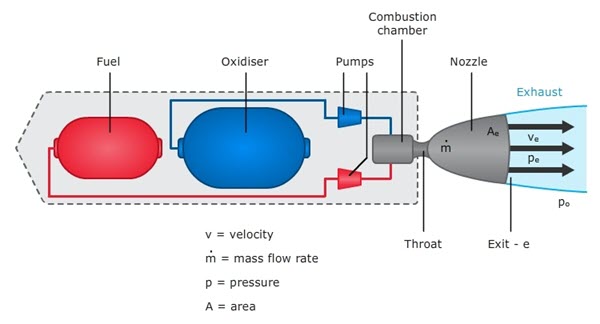 The design of any propulsion system is tailored to fit a specific application or mission requirement. These requirements are usually stated in terms of the application (anti-aircraft rocket, upper stage launch vehicle propulsion, or projectile assist), mission velocity, the desired flight trajectories (surface launch, orbit transfer, altitude-performance profile), vulnerability, attitude control torques and duty cycle, minimum life (during storage or in orbit), or number of  units to be built and delivered. They include constraints on cost, schedule, operating conditions (such as temperature limits), storage conditions, or safety rules.

The mission requirements can be translated into rocket engine requirements in terms of thrust-time profile, propellants, number of thrust chambers, total impulse, number of restarts, minimum reliability, likely propellant, and engine masses and their sizes or envelopes. We can do this only if we select several of the key engine features, such as the feed system, chamber pressure, the method of cooling the thrust chambers, thrust modulation (restart, throttle, thrust vector control), engine cycle (if using turbopump feed), and other key design features

Many different types of rocket engines have been built and flown, ranging in thrust size from less than 0.01 lbf to over 1.75 million pounds, with one-time operation or multiple starts  some have over 150,000 restarts), with or without thrust modulation (called throttling), single use or reusable, arranged as single engines or in clusters of multiple units. One way to categorize liquid propellant rocket engines is described in the below table. There are two categories, namely those used for boosting a payload and imparting a significant velocity increase to a payload, and auxiliary propulsion for trajectory adjustments and attitude control.

Liquid propellant rocket engine systems can be classified in several other ways. They can be reusable (like the Space Shuttle main engine or a booster rocket engine for quick ascent or maneuvers of fighter aircraft) or suitable for a single flight only (as the engines in the Atlas or Titan launch vehicles) and they can be restartable, like a reaction control engine, or single firing, as in a space launch vehicle. They can also be categorized by their propellants, application, or stage, such as an upper stage or booster stage, their thrust level, and by the feed system type (pressurized or turbopump) . The thrust chamber or thruster is the combustion device where the liquid propellants are metered, injected, atomized, mixed, and burned to form hot gaseous reaction products, which in turn are accelerated and ejected at a high velocity to impart a thrust force. A thrust chamber has three major parts: an injector, a combustion chamber, and a nozzle. 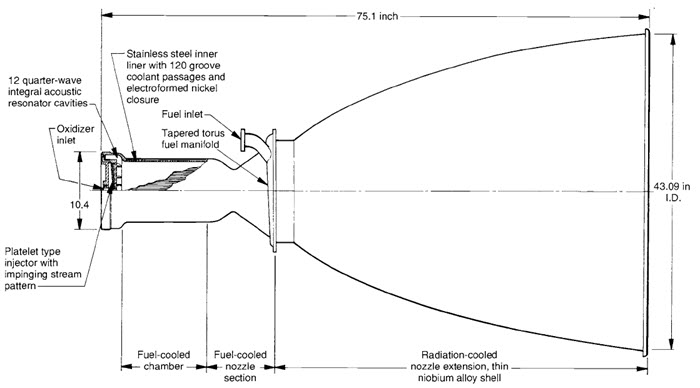 The propellants, which are the working substance of rocket engines, constitute the fluid that undergoes chemical and thermodynamic changes. The term liquid propellant embraces all the various liquids used and may be one of the following:

A monopropellant contains an oxidizing agent and combustible matter in a single substance. It may be a mixture of several compounds or it may be a homogeneous material, such as hydrogen peroxide or hydrazine. Monopropellants are stable at ordinary atmospheric conditions but decompose and yield hot combustion gases when heated or catalyzed.

A cold gas propellant (e.g., nitrogen) is stored at very high pressure, gives a low performance, allows a simple system and is usually very reliable. It has been used for roll control and attitude control.

A cryogenic propellant is liquified gas at low temperature, such as liquid oxygen (-183°C) or liquid hydrogen (-253°C). Provisions for venting the storage tank and minimizing vaporization losses are necessary with this type.

Storable propellants (e.g., nitric acid or gasoline) are liquid at ambient temperature and can be stored for long periods in sealed tanks. Space storable propellants are liquid in the environment of space; this storability depends on the specific tank design, thermal conditions, and tank pressure. An example is ammonia.

A gelled propellant is a thixotropic liquid with a gelling additive. It behaves like a jelly or thick paint. It will not spill or leak readily, can flow under pressure, will burn, and is safer in some respects.