What Are The Principles Of Rocket Propulsion?

The rocket engine in its simplest form consists of a combustion chamber and an expanding nozzle. The fuel and the oxidant, which after burning constitute the exhaust from the nozzle, are called propellants, as it is these only which produce the propulsive forces. Propellant gases are generated into the combustion chamber by burning propellants and are then expanded in a nozzle to a supersonic velocity, thereby, requiring a convergent-divergent nozzle. These high velocity gases going out of the nozzle produce the thrust and propel the rocket. 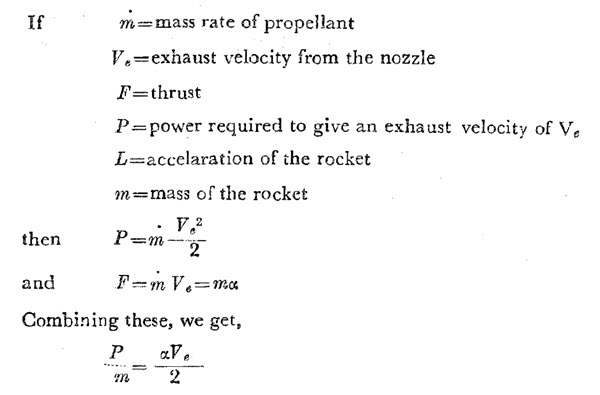 From the above equation, it is clear that the velocity and the thrust which can be obtained from a given type of rocket propulsion system greatly depend upon the power which is available for imparting kinetic energy, and the mass of the rocket vehicle. ln the case of chemical rockets, this energy is extracted from the propellant itself and depends greatly upon the characteristics of the propellant. Such rockets are energy-limited in that their performance is limited by the low exhaust velocity obtained by the use of present-day propellants. Same is the case for nuclear rockets.

In the case of ion, plasma, and photon propulsion, this energy is supplied from a separate power source which is usually an electric power obtained by nuclear or solar source. Such rockets are power limited as it is very difficult to produce such a huge amount of power within the small mass of the rocket. In order to obtain high exhaust velocity, i.e. high specific impulse for a given thrust, very large amount of power is required.

In the case of nuclear rockets, this is limited by the temperature by the rocket walls. In other methods of electrodynamic propulsion huge equipment is needed to convert such large amount of power into kinetic energy which increases the mass of the vehicle beyond economic and practical limits. For low exhaust velocity, the mass flow required will be high. Since this mass of propellants has to be carried within the rocket, a compromise is always made in terms of best economy obtained.

For a given power, very high velocities may not be of any use as the thrust is so low that it will not take any payload. It must be noted that the useful output of all propulsive devices is thrust, the pull which motivates the craft. The below figure shows the range of the accelerations and the exhaust velocities obtainable from different types of rocket propulsion systems. For going out of the earth’s gravitational field, high acceleration is needed so chemical and nuclear systems must be used. Once the gravity limit is crossed, the low acceleration available by ion or plasma devices is sufficient for inter-planetary travels. 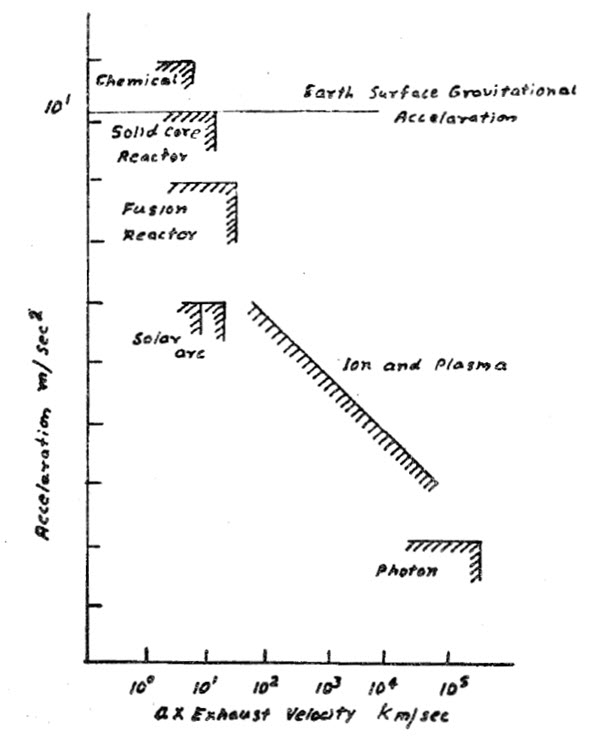 Basic Principles Of Rocket Propulsion With Respect To Newton’s Law:

The basic principles of rocket propulsion involve three laws of motion invented by Newton. A rocket in its simplest form is a chamber enclosing a gas under pressure. A small opening at one end of the chamber allows the gas to escape, and in doing so provides a thrust that propels the rocket in the opposite direction.

A good example of this one is a balloon. Air inside a balloon is compressed by the balloon’s rubber walls. The air pushes back so that the forces on each side are balanced. When the nozzle is released, air escapes through it and the balloon is propelled in the opposite direction. With space rockets, the gas is produced by burning propellants that can be solid or liquid in form or a combination of the two. 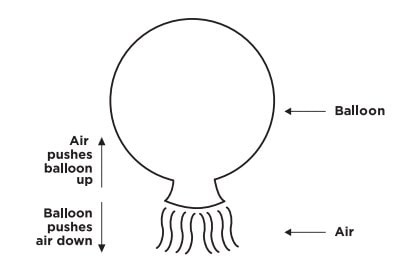 Newton’s first law can be stated as:

This law of motion is just an obvious statement of fact, but to know what it means, it is necessary to understand the terms rest, motion, and unbalanced force. If an object, such as a rocket, is at rest then the forces on it are balanced. It takes an additional force to unbalance the forces and make the object move. If the object is already moving, it takes such an unbalanced force, to stop it, change its direction from a straight line path, or alter its speed.

In rocket flight, forces become balanced and unbalanced all the time. A rocket on the launch pad is balanced. The surface of the pad pushes the rocket up while gravity tries to pull it down. As the engines are ignited, the thrust from the rocket unbalances the forces, and the rocket travels upward. Later, when the rocket runs out of fuel, it slows down, stops at the highest point of its flight, then falls back to Earth. 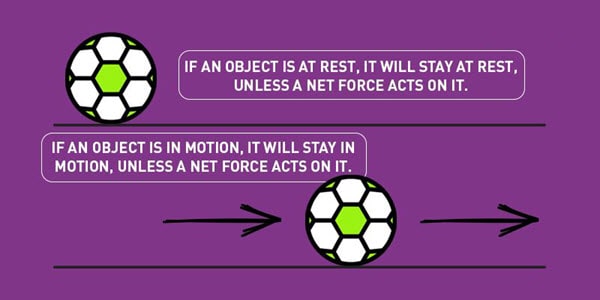 This law of motion is essentially a statement of a mathematical equation. The three parts of the equation are mass (m), acceleration (a), and force (f). Using letters to symbolize each part, the equation can be written as follows:
F = ma

Lets apply this principle to a rocket. The pressure created by the controlled explosion taking place inside the rocket’s engines is a force called thrust. That pressure accelerates the gas one way and the rocket the other.

Thus the rocket’s mass smaller during flight. In order for the left side of our equation to remain in balance with the right side, acceleration of the rocket has to increase as its mass decreases. That is why, a rocket starts off moving slowly and goes faster and faster as it climbs into space.

Newton’s second law of motion is especially useful when designing efficient rockets. For a rocket to climb into low Earth orbit, it must achieve a speed in excess of 28,000 km per hour. A speed of over 40,250 km per hour, called escape velocity, enables a rocket to leave Earth and travel out into deep space. Attaining space flight speeds requires the rocket engine to achieve the greatest thrust possible in the shortest time. In other words, the engine must burn a large mass of fuel and push the resulting gas out of the engine as rapidly as possible.

Newton’s second law of motion can be restated in the following way: the greater the mass of rocket fuel burned, and the faster the gas produced can escape the engine, the greater the upward thrust of the rocket. 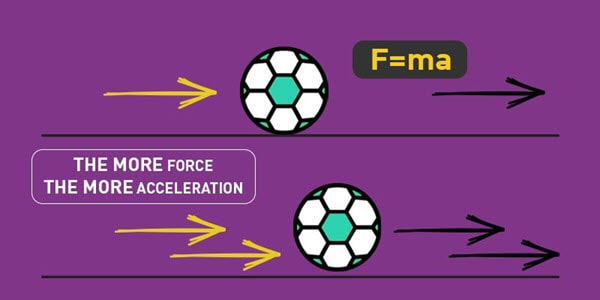 Newton’s third law can be stated as:

“Every action has an equal and opposite reaction.“

If you have ever stepped off a small boat that has not been properly tied to a pier, you will know exactly what this law means. The boat goes forward, you go backward!

A rocket can lift off from a launch pad only when it expels gas out of its engine. The rocket pushes on the gas, and the gas in turn pushes on the rocket. With rockets, the action is the expelling of gas out of the engine. The reaction is the movement of the rocket in the opposite direction. To enable a rocket to lift off from the launch pad, the action, or thrust, from the engine must be greater than the mass of the rocket. In space, however, even tiny thrusts will cause the rocket to change direction.

Putting The Laws Of Motion Together (Principles Of Rocket Propulsion):

An unbalanced force must be exerted for a rocket to lift off from a launch pad or for a craft in space to change speed or direction (first law). The amount of thrust (force) produced by a rocket engine will be determined by the mass of rocket fuel that is burned and how fast the gas escapes the rocket (second law). The reaction, or motion, of the rocket is equal to and in the opposite direction of the action, or thrust, from the engine (third law).

There are many number of terms used to describe the principles of rocket propulsion. Some are as follows,

Thrust is the force that propels a rocket or spacecraft and is measured in pounds, kilograms or Newtons. Physically speaking, it is the result of pressure which is exerted on the wall of the combustion chamber.
The below figure shows a combustion chamber with an opening, the nozzle, through which gas can escape. The pressure distribution within the chamber is asymmetric; that is, inside the chamber the pressure varies little, but near the nozzle it decreases somewhat. The force due to gas pressure on the bottom of the chamber is not compensated for from the outside. The resultant force F due to the internal and external pressure difference, the thrust, is opposite to the direction of the gas jet. It pushes the chamber upwards.
To create high speed exhaust gases, the necessary high temperatures and pressures of combustion are obtained by using a very energetic fuel and by having the molecular weight of the exhaust gases as low as possible. It is also necessary to reduce the pressure of the gas as much as possible inside the nozzle by creating a large section ratio. The section ratio, or expansion ratio, is defined as the area of the exit Ae divided by the area of the throat At.
The thrust F is the resultant of the forces due to the pressures exerted on the inner and outer walls by the combustion gases and the surrounding atmosphere, taking the boundary between the inner and outer surfaces as the cross section of the exit of the nozzle.  Applying the principle of the conservation of momentum gives,

The impulse, sometimes called total impulse, is the product of thrust and the effective firing duration. A shoulder fired rocket such as the LAW has an average thrust of 600 lbs and a firing duration of 0.2 seconds for an impulse of 120 lb-sec. The Saturn V rocket, used during the Apollo program, not only generated much more thrust but also for a much longer time. It had an impulse of 1.15 billion lb-sec.