What Is Strand Burner?

The Strand Burner (sometimes referred to as the Crawford Strand Burner) is an apparatus that provides for burn rate measurements of a solid rocket propellant in an environment of elevated pressure. The propellant sample being tested, referred to as a strand, is burned within the confines of a pressure tank, called a Firing Vessel. The strand is in the form of a pencil-like stick, and is electrically ignited at one end. The time duration for the strand to burn along its length (cigarette fashion) is measured.

Various means are used to measure the time duration, such as lead wires embedded in the strand which melt when contacted by the flame front, or by use of thermocouples. The burn rate is obtained by knowing the burning distance as well as the burning time between the lead wires (or thermocouples).To effectively characterize the burn rate versus pressure relationship for a particular propellant, 10 or more tests may be performed, at pressures ranging from a few atmospheres, to 100 atmospheres (1500 psi) or more. Nitrogen is normally used to pressurize the firing vessel. Here, we are going to discuss about a Strand Burner that was built primarily for burn rate characterization of the KN/Sugar propellants.

The firing vessel of the strand burner consists of a 4.86 litre steel tank with hemispherical end caps. One end cap is equipped with a 1″ NPT female fitting. Screwed into this fitting is a short length of 1″ pipe to which a circular flange has been welded. This flange mates with a matching flange on the strand holder. The two components are bolted together with six 1/4″ Grade 8 bolts. A gasket inserted between the flanges provides for a gas tight seal. The strand holder, to which the propellant strand is mounted (with “hot glue”).

The firing vessel is pressurized with nitrogen, and is filled from a rechargeable nitrogen supply tank via a copper tubing line fitting with a 0.020″ orifice. The orifice serves to reduce the flow rate during filling. Nitrogen should be used to purge the Firing Vessel prior to pressurizing. The firing vessel can be either mounted vertically, as shown in the below figure or horizontally. 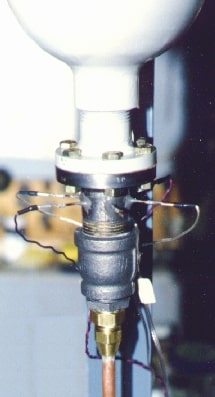 The distance between thermocouple beads should be measured before each test and recorded as the gauge length. Burning rate can be simply taken as the time time duration to burn this distance. Ignition of the strand should be accomplished electrically by use of a nichrome wire filament soldered to a pair of lead wires connected in turn to a second pair of terminals on the strand holder. Power for the igniter should be supplied by an external ignition box, similar to the type used for rocket motor initiation. A third thermocouple can be used to measure the ambient temperature inside the firing vessel, and should be connected to a third pair of terminals on the strand holder.