What Is Scramjet Engine?

A scramjet (supersonic combustion ramjet) is a variant of a ramjet air-breathing jet engine in which combustion takes place in supersonic airflow. As in ramjets, a scramjet relies on high vehicle speed to forcefully compress and decelerate the incoming air before combustion (hence ramjet), but whereas a ramjet decelerates the air to subsonic velocities before combustion, the airflow in a scramjet is supersonic throughout the entire engine. This allows the scramjet to operate efficiently at extremely high speeds: theoretical projections place the top speed of a scramjet between Mach 12 and Mach 24.

Scramjet engines are a type of jet engine, and rely on the combustion of fuel and an oxidizer to produce thrust. Similar to conventional jet engines, scramjet-powered aircraft carry the fuel on board, and obtain the oxidizer by the ingestion of atmospheric oxygen (as compared to rockets, which carry both fuel and an oxidizing agent). This requirement limits scramjets to suborbital atmospheric propulsion, where the oxygen content of the air is sufficient to maintain combustion. The scramjet is composed of three basic components and are,

Unlike a typical jet engine, such as a turbojet or turbofan engine, a scramjet does not use rotating, fan-like components to compress the air; rather, the achievable speed of the aircraft moving through the atmosphere causes the air to compress within the inlet. As such, no moving parts are needed in a scramjet. In comparison, typical turbojet engines require inlet fans, multiple stages of rotating compressor fans, and multiple rotating turbine stages, all of which add weight, complexity, and a greater number of failure points to the engine.

Due to the nature of their design, scramjet operation is limited to near-hypersonic velocities. As they lack mechanical compressors, scramjets require the high kinetic energy of a hypersonic flow to compress the incoming air to operational conditions. Thus, a scramjet-powered vehicle must be accelerated to the required velocity by some other means of propulsion, such as turbojet, railgun, or rocket engines.

While scramjets are conceptually simple, actual implementation is limited by extreme technical challenges. Hypersonic flight within the atmosphere generates immense drag, and temperatures found on the aircraft and within the engine can be much greater than that of the surrounding air. Maintaining combustion in the supersonic flow presents additional challenges, as the fuel must be injected, mixed, ignited, and burned within milliseconds. While scramjet technology has been under development since the 1950s, only very recently have scramjets successfully achieved powered flight.

Scramjets are designed to operate in the hypersonic flight regime, beyond the reach of turbojet engines, and, along with ramjets, fill the gap between the high efficiency of turbojets and the high speed of rocket engines.

Ramjets utilize high-speed characteristics of air to literally ‘ram’ air through an inlet diffuser into the combustor. At transonic and supersonic flight speeds, the air upstream of the inlet is not able to move out of the way quickly enough, and is compressed within the diffuser before being diffused into the combustor. Combustion in a ramjet takes place at subsonic velocities, similar to turbojets, but the combustion products are then accelerated through a convergent-divergent nozzle to supersonic speeds.

As they have no mechanical means of compression, ramjets cannot start from a standstill, and generally do not achieve sufficient compression until supersonic flight. The lack of intricate turbomachinery allows ramjets to deal with the temperature rise associated with decelerating a supersonic flow to subsonic speeds, but this only goes so far: at near-hypersonic velocities, the temperature rise and inefficiencies discourage decelerating the flow to the magnitude found in ramjet engines.

Scramjet engines operate on the same principles as ramjets, but do not decelerate the flow to subsonic velocities. Rather, a scramjet combustor is supersonic: the inlet decelerates the flow to a lower Mach number for combustion, after which it is accelerated to an even higher Mach number through the nozzle. By limiting the amount of deceleration, temperatures within the engine are kept at a tolerable level, from both a material and combustive standpoint. Even so, current scramjet technology requires the use of high-energy fuels and active cooling schemes to maintain sustained operation, often using hydrogen and regenerative cooling techniques.

The compression, combustion, and expansion regions of: (a) turbojet, (b) ramjet, and (c) scramjet engines 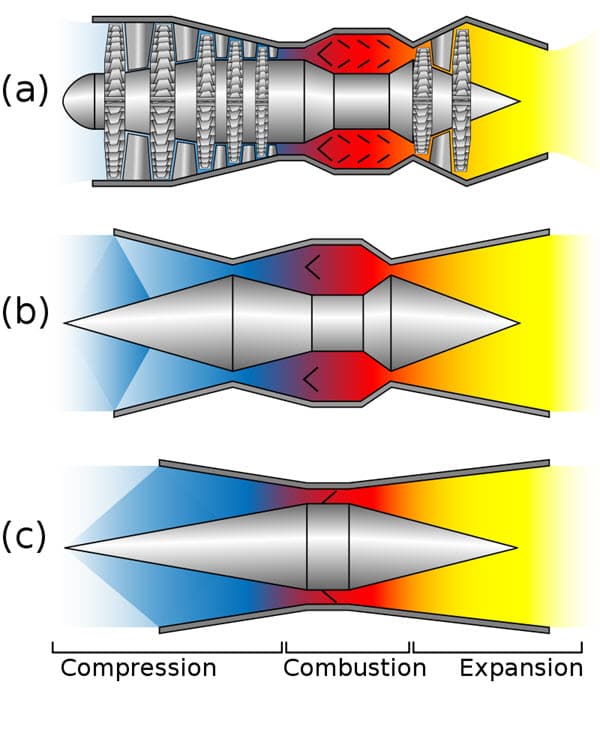