What Are Solid Propellant Rockets?

Solid propellant rockets are the simplest of all rocket designs. They consist of a casing, usually steel, filled with a mixture of solid compounds (fuel and oxidizer) that burn at a rapid rate, expelling hot gases from a nozzle to produce thrust. When ignited, a solid propellant burns from the center out towards the sides of the casing. The shape of the center channel determines the rate and pattern of the burn, thus providing a means to control thrust. Unlike liquid propellant engines, solid propellant motors cannot be shut down. Once ignited, they will burn until all the propellant is exhausted.

In a solid propellant rocket, the fuel and oxidizer are already mixed together and set as a solid inside the combustion chamber. This solid is called the propellant grain. The rate at which the chemical reaction takes place depends on the type of fuel chosen and the surface area of the exposed grain. The inside length is normally hollow section to increase the amount of grain exposed and available to react. A star-shaped hollow section is often used to maintain a steady burn with even thrust. 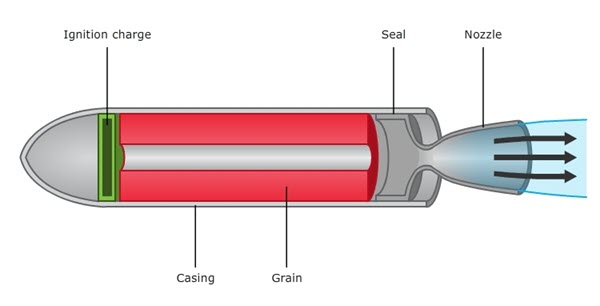 Historically, the early rocket motor propellants used to be grouped into two classes: double-base (DB*) propellants were used as the first production propellants, and then the development of polymers as binders made the composite propellants feasible. Double base (DB) propellants form a homogeneous propellant grain, usually a nitrocellulose (NC*), a solid ingredient which absorbs liquid nitroglycerine (NG) plus minor percentages of additives. Both the major ingredients are explosives and function as a combined fuel and oxidizer. Both extruded double base (EDB) and cast double-base (CDB) propellant have found extensive applications, mostly in small tactical missiles of older design. By adding crystalline nitramines (HMX or RDX)* the performance and density can be improved; this is sometimes called cast-modified double-base propellant.

A further improvement is to add an elastomeric binder (rubber-like, such as crosslinked polybutadiene), which improves the physical properties and allows more nitramine and thus improves the performance slightly. The resulting propellant is called elastomeric-modified cast double-base (EMCDB). These four classes of double base have nearly smokeless exhausts. Adding some solid ammonium perchlorate (AP) and aluminum (A1) increases the density and the specific impulse slightly, but the exhaust gas is smoky. The propellant is called composite-modified double-base propellant or CMDB.

Composite propellants form a heterogeneous propellant grain with the oxidizer crystals and a powdered fuel (usually aluminum) held together in a matrix of synthetic rubber (or plastic) binder, such as polybutadiene (HTPB)*. Composite propellants are cast from a mix of solid (AP crystals, A1 powder)* and liquid (HTPB, PPG)* ingredients. The propellant is hardened by crosslinking or curing the liquid binder polymer with a small amount of curing agent, and curing it in an oven, where it becomes hard and solid. In the past three decades the composite propellants have been the most commonly used class. They can be further subdivided:

Several of the classifications can be confusing. The term composite modified double-base propellant (CMDB) has been used for,

Propellants can be classified by the density of the smoke in the exhaust plume as smoky, reduced smoke, or minimum smoke (essentially smokeless). Aluminum powder, a desirable fuel ingredient, is oxidized to aluminum oxide, which forms visible small solid smoke particles in the exhaust gas. Most composite propellants are smoky. By reducing the aluminum content in composite propellant, the amount of smoke is
also reduced. Carbon (soot) particles and metal oxides, such as zirconium oxide or iron oxide, can also be visible if in high enough concentration.
The safety rating for detonation can distinguish propellants as a potentially detonable material (class 1.1) or as a non-detonable material (class 1.3). Examples of class 1.1 propellant are a number of double-base propellants and composite propellants containing a significant portion of solid explosive (e.g., HMX or RDX), together with certain other ingredients.

Propellants can be classified by some of the principal manufacturing processes that are used. Cast propellant is made by mechanical mixing of solid and liquid ingredients, followed by casting and curing; it is the most common process for composite propellants. Curing of many cast propellants is by chemical reaction between binder and curing agent at elevated temperature (45 to 150°C); however, there are some that can be cured at ambient temperatures (20 to 25°C) or hardened by a nonchemical process such as crystallization.

Propellant can also be made by a solvation process (dissolving a plasticizer in a solid pelletized matrix, whose volume is expanded). Extruded propellant is made by mechanical mixing (rolling into sheets) followed by extrusion (pushing through a die at high pressure). Solvation and extrusion processes apply primarily to double-base propellants.