What Is Nuclear Rocket?

Nuclear rocket is conceptually similar to solar thermal rocket except for the source of heat. In nuclear rocket propulsion, the heat released from nuclear fission is used to burn the propellant. At the fundamental level, all nuclear fission reactors convert a nuclear mass m into energy E according to E = mc², where c is the speed of light. Fission is the process in which neutrons are absorbed by the fuel material. A fissile fuel, usually uranium or plutonium, converts a percentage of its mass into energy when its nuclei are split by neutrons. The excitement of the fuel atoms produces thermal energy which is then used to heat the propellant.

The heated propellant flows through the core of a nuclear reactor, and expands through a rocket nozzle to create thrust. To produce greater impulse and efficiency, higher temperatures in the reactor core are needed. In addition, a low propellant molecular mass will lead to a greater expansion of the propellant gas which in turn generates greater nozzle pressure. As such, hydrogen is mainly used as the propellant. Effectively, a nuclear thermal propulsion system can produce 107 times greater energy density than a chemical propulsion system.

The most traditional type uses a conventional (albeit light-weight) nuclear reactor running at high temperatures to heat the working fluid that is moving through the reactor core. This is known as the solid-core design, and is the simplest design to construct.
They are limited by the melting point of the materials used in the reactor cores. Since the efficiency of a rocket engine is related to the square root of the temperature of the working fluid, the solid core design needs to be constructed of materials that remain strong at as high a temperature as possible.
Nuclear reactions can create much higher temperatures than the temperatures the materials can withstand. Even more limiting is the cracking of fuel coatings due to the large temperature ranges (from 22K up to 3000K over the length of a 1.3m fuel rod), and the necessity of matching coefficients of expansion in all the components. Using hydrogen propellant, a solid-core design typically delivers specific impulses (Isp) on the order of 850 to 1000 seconds, about twice that of liquid hydrogen-oxygen designs such as the Space Shuttle Main Engine. 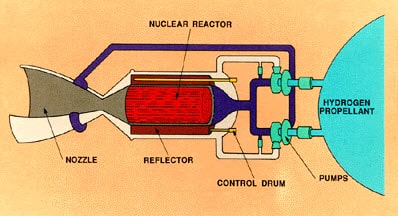 A liquid-core engine which involves a rotating solid cylinder can be used to contain the fuel at a higher temperature. The induced centripetal force causes the fuel, which is of a higher molecular mass than the propellant, to the cylindrical wall. As the fuel melts and rises to temperatures above the melting point of the cylinder, the inner cylindrical wall naturally melts. The twist to this engine lies in the centripetal force which keeps the molten layer intact. Additionally, coolants running on the outside of the cylinder ensure that the entire cylinder does not melt through. The fuel is therefore able to be brought to a higher temperature than that in a solid core, and the propellant expelled with a greater force. Liquid-core engines can attain a much higher specific impulse of 1600 seconds.

These engines are currently considered to be very difficult to build. The reaction time of the nuclear fuel is much longer than the heating time of the working fluid and therefore requires a method to trap the fuel inside the engine while allowing the working fluid to easily exit through the nozzle. Most liquid-phase engines have focused on rotating the fuel/fluid mixture at very high speeds to press the fuel to the outside by centripetal force. 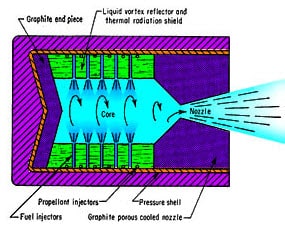 The final classification is the gas-core engine. This is a modification to the liquid-core design which uses rapid circulation of the fluid to create a toroidal pocket of gaseous uranium fuel in the middle of the reactor, surrounded by hydrogen. In this case, the fuel does not touch the reactor wall at all, so temperatures could reach several tens of thousands of degrees, which would allow specific impulses of 3000 to 5000 seconds. 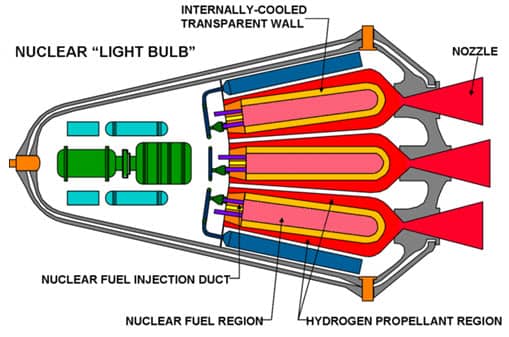 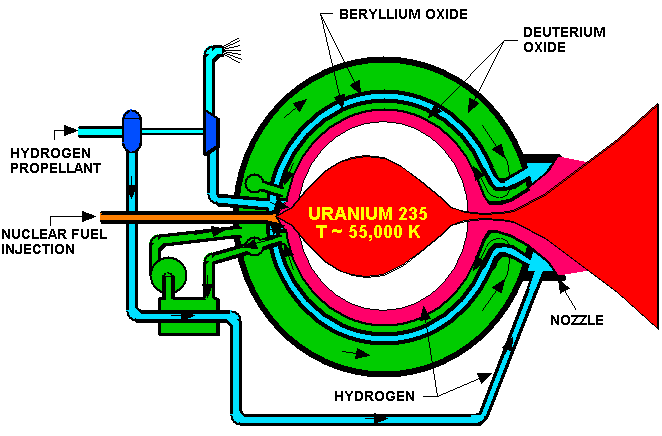 Nuclear rocket provides a greater specific impulse as compared to chemical rocket. Specific impulses of 800 seconds obtainable by nuclear thermal propulsion utilising a solid core are twice that achievable by its chemical counterpart. The greater specific impulse and lower propellant molecular weight increase the propulsive force per unit propellant flow. As the same performance is obtainable for a reduced propellant mass, a greater payload mass can be delivered into space with a nuclear thermal system. A spacecraft would then be able to attain faster transfers of orbit which minimises travel time to the destination.
Nuclear thermal engines are not designed to accelerate payloads into space but to function in the vacuum of space. Therefore addition shielding is required to prevent radiation from scattering off the atmosphere and back onto the payload, which will hinder the proper operation of the engine during launch.
In addition, in the event of atmospheric or orbital rocket failure, there will inevitably be the release of hazardous radioactive materials into the environment. However, the environmental risks are modest. It will take more than a hundred launch failures to cause the same amount of fission activity as a sunken nuclear submarine.