There are basically three main types of electric rocket propulsion system and as follows,

Electrothermal – Propellant is heated electrically and expanded thermodynamically; i.e., the gas is accelerated to supersonic speeds through a nozzle, as in the chemical rocket.
Electrostatic – Acceleration is achieved by the interaction of electrostatic fields on non-neutral or charged propellant particles such as atomic ions, droplets, or colloids.
Electromagnetic – Acceleration is achieved by the interaction of electric and magnetic fields within a plasma. Moderately dense plasmas are high temperature or nonequilibrium gases, electrically neutral and reasonably good conductors of electricity.

Electrothermal thrusters differ from both electromagnetic and electrostatic propulsion systems due to their operational design; electromagnetic and electrostatic systems propel charged ions through the use of electric and magnetic fields, while electrothermal systems heat the propellant, and rely upon thermal dynamics to propel the system. In typical operation, a propellant is electrically heated, which increases the pressure and expands the gas, forcing the energized mass out of the nozzle and providing thrust to the spacecraft. In this category, the electric energy is used to heat the propellant, which is then thermodynamically expanded through a nozzle. There are two basic types in use today:

A resistojet propulsion system relies upon the outlined concept for electrothermal thrusters; as shown in the below figure, a propellant is injected into the resistojet assembly, heated by a power supply and radiative heat transfer, and then expelled through a compressive exhaust nozzle.

In more advanced resistojet concepts, a dual stage reaction increases propellant efficiency; hydrazine, after undergoing conventional chemical decompression, is then electrically heated and expelled, massively increasing the thrust yield from a set amount of propellant. However, the specific impulse for resistojet thrusters is limited due to the high molecular mass of the propellant and an approximate 3000 K temperature ceiling due to direct exposure of critical elements to internal resistojet temperatures.

An electrotheremal resistojet has an approximate 150 to 700 specific impulse range, efficiency levels between 35% and 90%, and thrust between 5 and 5,000 mN; for an resistojet powered by a dual stage hydrazine reaction, the specific impulse becomes restricted to between 299 and 304, energy conversion efficiency exceeds 300% (due to additional thrust provided by the decompression of the hydrazine), and thrust levels of 330 mN and above.

Both the high efficiency levels and high maximum thrust levels indicate potential viability as described, but a low specific impulse and negligible systems development or testing within the report parameters detract from the overall operability of the resistojet propulsion system. 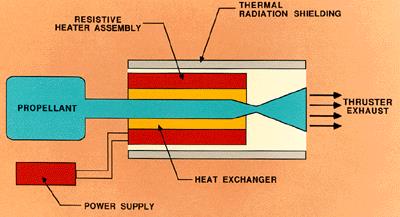 A Schematic Diagram Of A Resistojet Thruster

Another potentially viable electrothermal propulsion system is the arcjet thruster. This propulsion system relies upon a centrally located cathode surrounded by an anode; a high voltage electric field is generated between the cathode and anode, while the propellant is injected between the two electrodes. As shown in the below figure, the anode additionally functions as the nozzle for expelling the superheated gas.

In the resistojet propulsion concept, a primary limiting factor is the maximum attainable operating temperature of 3,000 K, but this temperature maximum is increased to between 10,000 K and 20,000 K in arcjet thrusters. The indirect application of these extremely high temperatures through an electric current provides insulation for operational elements, and the expulsion pattern of the superheated gas contributes to the insulating effect.

Comparatively, large specific impulse ranges between 280 and 2300, give significant advantages over resistojet propulsion methods, while a comparable thrust range of 50 to 5,000 mN further indicates the viability of the arcjet propulsion system. Conversely however, the resistojet thruster system provides a significantly higher energy conversion efficiency range, of approximately 35% to 90% compared with the arcjet efficiency range of 30% to 50%.

Additional concerns detract from the operability and viability of the arcjet system, including electrode erosion and massive power requirements, has led to negligible implementation or development of the thruster in relation to use as a primary propulsion method.

Electrostatic thrusters rely on Coulomb forces to accelerate a propellant composed of non-neutral charged particles. They can operate only in a near vacuum. The electric force depends only on the charge, and all charged particles must be of the same “sign” if they are to move in the same direction. Electrons are easy to produce and are readily accelerated, but they are so extremely light in mass as to be impractical for electric propulsion.

From thermal propulsion fundamentals, one might deduce that “the lighter the exhaust particle the better.” However, the momentum carried by electrons is relatively negligible even at velocities near the speed of light. Thus, the thrust per unit area that can be imparted to such an electron flow remains negligible even when the effective exhaust velocity or specific impulse gets to be very high.

Accordingly, electrostatic thrusters use charged heavy-molecular-mass atoms as positive ions (a proton is 1840 times heavier than the electron and a typical ion of interest contains hundreds of protons). There has been some research work with small liquid droplets or charged colloid which can in turn be some 10,000 times heavier than atomic particles.

In terms of power sources and transmission equipment, the use of the heavier particles contributes to more desirable characteristics for electrostatic thrusters. For example, high voltages and low currents in contrast to low voltages and high currents with their associated massive wiring and switching.

Electrostatic thrusters can be categorized by their source of charged particles as follows: 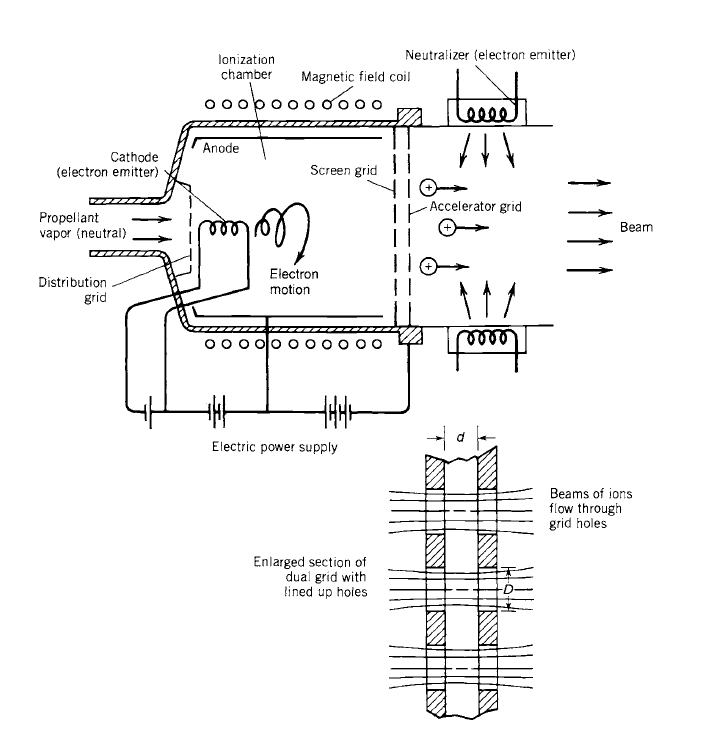 This third major type of electric propulsion device accelerates propellant gas that has been heated to a plasma state. Plasmas are mixtures of electrons, positive ions, and neutrals that readily conduct electricity at temperatures usually above 5000 K or 9000 R. According to electromagnetic theory, whenever a conductor carries a current perpendicular to a magnetic field, a body force is exerted on the conductor in a direction at right angles to both the current and the magnetic field. Unlike the ion engine, this acceleration process yields a neutral exhaust beam.

Some of the electromagnetic thrusters are as follows,

A magneto plasma dynamic (MPD) thruster (MPDT) is a form of electrically powered spacecraft propulsion which uses the Lorentz force (the force on a charged particle by an electromagnetic field) to generate thrust. It is sometimes referred to as Lorentz Force Accelerator (LFA) or (mostly in Japan) MPD arcjet.

Generally, a gaseous material is ionized and fed into an acceleration chamber, where the magnetic and electrical fields are created using a power source. The particles are then propelled by the Lorentz force resulting from the interaction between the current flowing through the plasma and the magnetic field (which is either externally applied, or induced by the current) out through the exhaust chamber. Unlike chemical propulsion, there is no combustion of fuel. As with other electric propulsion variations, both specific impulse and thrust increase with power input, while thrust per watt drops.

There are two main types of MPD thrusters, applied-field and self-field. Applied-field thrusters have magnetic rings surrounding the exhaust chamber to produce the magnetic field, while self-field thrusters have a cathode extending through the middle of the chamber. Applied fields are necessary at lower power levels, where self-field configurations are too weak. Various propellants such as xenon, neon, argon, hydrogen, hydrazine, and lithium have been used, with lithium generally being the best performer. 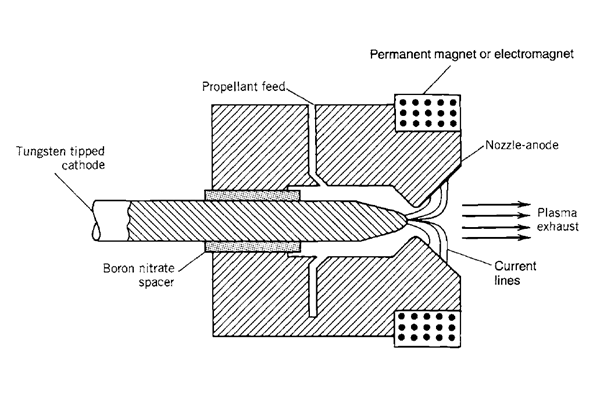 A pulsed plasma thruster (PPT), also known as a plasma jet engine, is a form of electric spacecraft propulsion. PPTs are generally flown on spacecraft with a surplus of electricity from abundantly available solar energy. Most PPTs use a solid material (normally PTFE, more commonly known as Teflon) for propellant, although very few use liquid or gaseous propellants.

The below figure shows the simplest plasma accelerator, employing a self-induced magnetic field. This is a pulsed plasma thruster (PPT), accelerating plasmas  “struck” between two rail electrodes and fed by a capacitor, which is in turn charged by a power supply. The current flow through the plasma quickly discharges the capacitor and hence the mass flow rate must be pulsed according to the discharge schedule. The discharge current forms a current loop, which induces a strong magnetic field perpendicular to the plane of the rails.

Analogous to a metal conductor in an electric motor, the Lorentz force acts on the plasma, accelerating it along the rails. Some electrical energy is lost to the electrodes and the ionization energy is never recovered; moreover, this particular plasma does not exit well collimated, and propellant utilization tends to be poor.

Hall thrusters operate on a variety of propellants, the most common being xenon and krypton. Other propellants of interest include argon, bismuth, iodine, magnesium, zinc and Adamantane. Hall thrusters are able to accelerate their exhaust to speeds between 10 and 80 km/s (1,000–8,000 s specific impulse), with most models operating between 15 and 30 km/s (1,500–3,000 s specific impulse).

The essential working principle of the Hall thruster is that it uses an electrostatic potential to accelerate ions up to high speeds. In a Hall thruster, the attractive negative charge is provided by an electron plasma at the open end of the thruster instead of a grid. A radial magnetic field of about 100–300 G (0.01–0.03 T) is used to confine the electrons, where the combination of the radial magnetic field and axial electric field cause the electrons to drift in azimuth thus forming the Hall current from which the device gets its name. 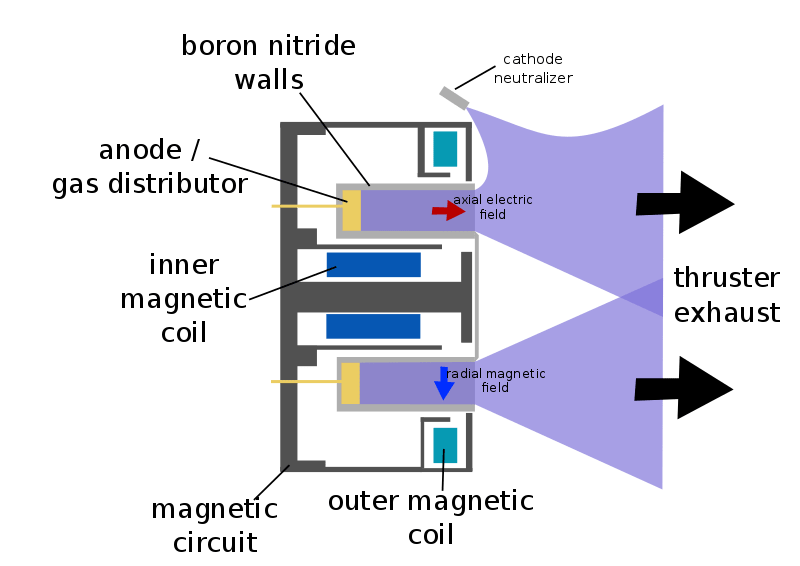