The propellant feed system has two principal functions: to raise the pressure of the propellants and to feed them to one or more thrust chambers. The energy for these functions comes either from a high-pressure gas, centrifugal pumps, or a combination of the two.

The selection of a particular feed system and its components is governed primarily by the application of the rocket, requirements, duration, number or type of thrust chambers, past experience, mission, and by general requirements of simplicity of design, ease of manufacture, low cost, and minimum inert mass. All feed systems have piping, a series of valves, provisions for filling and removing (draining and flushing) the liquid propellants, and control devices to initiate, stop, and regulate their flow and operation.

Generally, there are two different types of propellant feed systems of liquid propellant rockets and are as follows,

One of the simplest and most common means of pressurizing the propellants is to force them out of their respective tanks by displacing them with high-pressure gas. This gas is fed into the propellant tanks at a controlled pressure, thereby giving a controlled propellant discharge. Because of their relative simplicity, the rocket engines with pressurized feed systems can be very reliable.

A simple pressurized feed system is shown schematically below. It consists of a high-pressure gas tank, a gas starting valve, a pressure regulator, propellant tanks, propellant valves, and feed lines. Additional components, such as filling and draining provisions, check valves, filters, flexible elastic bladders for separating the liquid from the pressurizing gas, and pressure sensors or gauges, are also often incorporated.

After all tanks are filled, the high-pressure gas valve in the below figure is remotely actuated and admits gas through the pressure regulator at a constant pressure to the propellant tanks. The check valves prevent mixing of the oxidizer with the fuel when the unit is not in an upright position. The propellants are fed to the thrust chamber by opening valves. When the propellants are completely consumed, the pressurizing gas can also scavenge and clean lines and valves of much of the liquid propellant residue.

The variations in this system, such as the combination of several valves into one or the elimination and addition of certain components, depend to a large extent on the application. If a unit is to be used over and over, such as space-maneuver rocket, it will include several additional features such as, possibly, a thrust-regulating device and a tank level gauge; they will not be found in an expendable, single-shot unit, which may not even have a tank-drainage provision.

Some pressure feed systems can be prefilled with propellant and pressurizing agent at the factory and stored in readiness for operation. Compared to a solid propellant rocket unit, these storable prepackaged liquid propellant pressurized feed systems offer advantages in long-term storability and resistance to transportation vibration or shock. 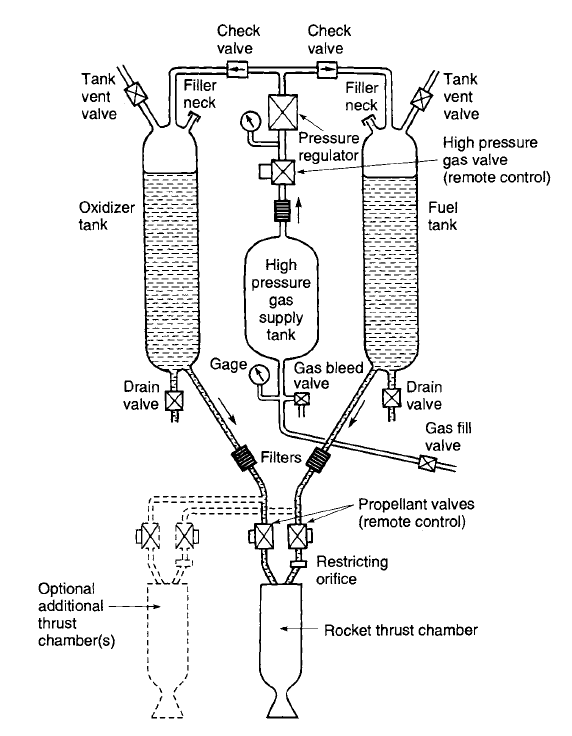 The principal components of a rocket engine with one type of turbopump system are shown in the below simplified diagram. Here, the propellants are pressurized by means of pumps, which in turn are driven by turbines. These turbines derive their power from the expansion of hot gases.

Engines with turbopumps are preferred for booster and sustainer stages of space launch vehicles, long-range missiles, and in the past also for aircraft performance augmentation. They are usually lighter than other types for these high thrust, long duration applications. The inert hardware mass of the rocket engine (without tanks) is essentially independent of duration. 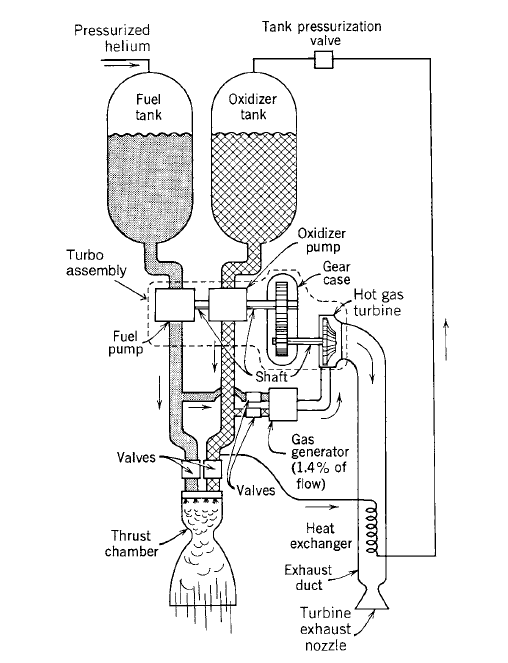 An engine cycle for turbopump-fed engines describes the specific propellant flow paths through the major engine components, the method of providing the hot gas to one or more turbines, and the method of handling the turbine exhaust gases. There are open cycles and closed cycles.

Open denotes that the working fluid exhausting from the turbine is discharged overboard, after it gets expanded in a nozzle of its own, or discharged into the nozzle of the thrust chamber at a point in the expanding section far downstream of the nozzle throat. In closed cycles or topping cycles, all the working fluid from the turbine is injected into the engine combustion chamber to make the most efficient use of its remaining energy.

There are three most common cycles of turbopump feed systems and as follows,

The gas generator cycle and the staged combustion cycle can use most of the common liquid propellants. The expander cycle works best with vaporized cryogenic hydrogen as the coolant for the thrust chamber, because it is an excellent heat absorber and does not decompose. Here, we are going to see each cycle with a separate turbopump for fuel and for oxidizer. However, an arrangement with the fuel and oxidizer pump driven by the same turbine is also feasible and sometimes reduces the hardware mass, volume, and cost.

The “best” cycle has to be selected on the basis of the mission, the suitability of existing engines, and the criteria established for the particular vehicle. There is an optimum chamber pressure and an optimum mixture ratio for each application, engine cycle, or optimization criterion, such as maximum range, lowest cost, or highest payload.

In the gas generator cycle, the turbine inlet gas comes from a separate gas generator. It’s propellants can be supplied from separate propellant tanks or can be bled off the main propellant feed system. This cycle is relatively simple; the pressures in the liquid pipes and pumps are relatively low (which reduces inert engine mass). It has less engine-specific impulse than an expander cycle or a staged combustion cycle.

The pressure ratio across the turbine is relatively high, but the turbine or gas generator flow is small (1 to 4% of total propellant flow) if compared to closed cycles. Some early engines used a separate mono-propellant for creating the generator gas. The German V-2 missile engine used hydrogen peroxide, which was decomposed by a catalyst. Typically, the turbine exhaust gas is discharged overboard through one or two separate small low area-ratio nozzles (at relatively low specific impulse).

Alternatively, this turbine exhaust can be aspirated into the main flow through openings in the diverging nozzle section, as shown schematically in the below figure. This gas then protects the walls near the nozzle exit from high temperatures. Both methods can provide a small amount of additional thrust.

The gas generator mixture ratio is usually fuel rich (in some engine it is oxidizer rich) so that the gas temperatures are low enough (typically 900 to 1350 K) to allow the use of uncooled turbine blades and uncooled nozzle exit segments. With a gas generator cycle, the specific impulse of the thrust chamber by itself is always a little higher than that of the engine and the thrust of the thrust chamber is always slightly lower than that of the engine. 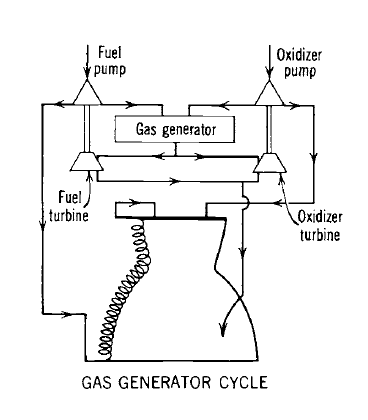 In the expander cycle, most of the engine coolant (usually hydrogen fuel) is fed to low-pressure-ratio turbines after having passed through the cooling jacket where it picked up energy. Part of the coolant, perhaps 5 to 15%, bypasses the turbine (not shown in the below figure) and rejoins the turbine exhaust flow before the entire coolant flow is injected into the engine combustion chamber where it mixes and burns with the oxidizer.

The primary advantages of the expander cycle are good specific impulse, engine simplicity, and relatively low engine mass. In the expander cycle, all the propellants are fully burned in the engine combustion chamber and expanded efficiently in the engine exhaust nozzle. This cycle is used in the RL10 hydrogen/oxygen rocket engine, and different versions of this engine have flown successfully in the upper stages of several space launch vehicles.

Heat absorbed by the thrust chamber cooling jacket gasifies and raises the gas temperature of the hydrogen so that it can be used to drive the turbine, which in turn drives a single-stage liquid oxygen pump (through a gear case) and a two-stage liquid hydrogen pump. The cooling down of the hardware to cryogenic temperatures is accomplished by flowing (prior to engine start) cold propellant through cooldown valves.

The pipes for discharging the cooling propellants overboard are not shown here. Thrust is regulated by controlling the flow of hydrogen gas to the turbine, using a bypass to maintain constant chamber pressure. Helium is used as a means of power boost by actuating several of the larger valves through solenoid-operated pilot valves. 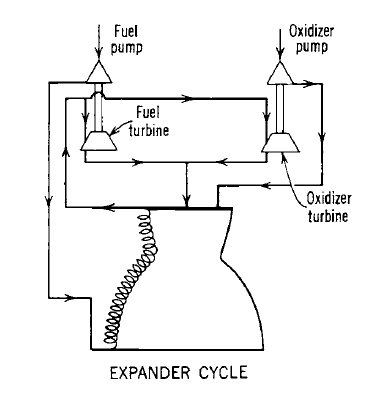 In the staged combustion cycle, the coolant flow path through the cooling jacket is the same as that of the expander cycle. Here a high-pressure precombustor (gas generator) burns all the fuel with part of the oxidizer to provide high-energy gas to the turbines. The total turbine exhaust gas flow is injected into the main combustion chamber where it burns with the remaining oxidizer. This cycle lends itself to high-chamber-pressure operation, which allows a small thrust chamber size.

The extra pressure drop in the precombustor and turbines causes the pump discharge pressures of both the fuel and the oxidizer to be higher than with open cycles, requiring heavier and more complex pumps, turbines, and piping. The turbine flow is relatively high and the turbine pressure drop is low, when compared to an open cycle. The staged combustion cycle gives the highest specific impulse, but it is more complex and heavy.

In contrast, an open cycle can allow a relatively simple engine, lower pressures, and can have a lower production cost. A variation of the staged combustion cycle is used in the Space Shuttle main engine. This engine actually uses two separate precombustion chambers, each mounted directly on a separate main turbopump. In addition, there are two more turbopumps for providing a boost pressure to the main pumps, but their turbines are not driven by combustion gases; instead, high-pressure liquid oxygen drives one booster pump and evaporated hydrogen drives the other. 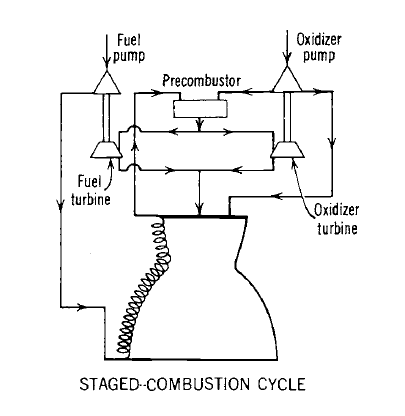